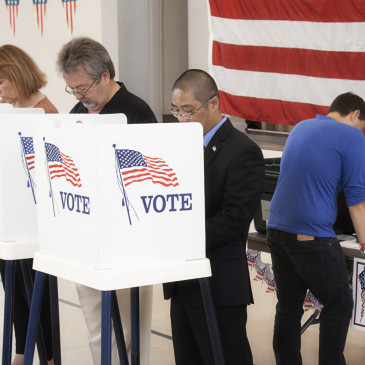 The Economy Will Survive This Presidential Election

The Election. Many Americans are concerned about how the presidential election will turn out. But nowadays people’s gloom about the post-election economy and the financial markets is being unduly influenced by headlines.

Six of every 10 Americans say the outcome of the presidential election represents the biggest threat to the U.S. economy over the next six months. This according to a recent BankRate.com survey.

Moreover, this was the majority view regardless of major political party affiliation — Republican, Democrat, or Independent. It was shared by most of every demographic group studied. No matter the age, gender, income level, ethnicity, or level of education. Indeed, the number of people fixated on the election as the economy’s biggest threat was five times greater than the second-biggest concern, terrorism.

Truth is, people are sorely misjudging the short-term threat that any presidential election presents.

Markets and economies do not implode around elections. Yes, the presidential election brings plenty of uncertainty to the market. But whatever troubles you see looming won’t be coming to roost in the next six months. In all likelihood, it will take six months just to have an idea of the economic impact the election could have in the long term.

Do yourself a favor: resist the temptation to get so caught up in the round-the-clock news cycle that it blurs rational thought.

You hear about the election 24-7 but yet the unanswered questions about what’s going to change. The president can’t change everything overnight. Once that realization comes to light, the uncertainty and anxiety people feel today will greatly dissipate.

It’s not that people should adopt “Don’t Worry, Be Happy” as their theme song, it’s just that fears about the election blowing up the economy in the short run are misplaced. Acting on those fears as an investor would be a significant mistake.

For as much credit or blame as we want to give any president for the economic conditions during their tenure, there’s only so much the commander-in-chief actually controls.

The Role of the Federal Reserve

For example, plenty of people believe that the market and economy will suffer when the Federal Reserve raises interest rates. This is now widely expected to happen shortly after the election, regardless of which candidate wins.

If a rate hike makes the stock market stall, it’s not really related to the new occupant at 1600 Pennsylvania Avenue. Neither is either candidate likely to be able to talk the Fed governors out of a hike (if they even would want to).

Another relevant, recent example involves Brexit. Brexit was the vote in Great Britain to leave the European Union. While the move itself has direct links to the British economy, it upset the market only for a matter of hours before it was shrugged off. We will see if the real economic consequences will be settled in the months or even years to come.

But the real reason for investors to avoid acting on nerves is that the timing is off. “There is some validity to the idea that there is a threat to the economy, but it is more in the post-election year. This essentially means the time frame that people are worried about is wrong.

In post-election years — regardless of which party wins — there is a sell-off after the inaugural ball. A lot of it has to do with the way whoever comes into office is going to try to push through their most difficult and unsavory policy initiatives. I have to admit that I feel the same kind of nervousness as everyone else. But, if the election is going to lead to trouble for the economy, it’s going to be further out.

No president can put the brakes on the market, nor wants to. Whoever wins in November inherits a market that has a long bull rally and the potential to keep going. If only because Wall Street tends to climb a proverbial wall of worry.

Moreover, no winning candidate in this year’s election is going to trigger any sort of market euphoria. The market’s long-term trends typically are unaffected by which party holds the White House. Post-election years tend to be a bit worse when a Republican has been elected. That trend is seen reversing in mid term years.

You can understand why everyone is worried about it, but you have to hope people act rationally. All of the talk and all of the news  don’t have people acting on anything right now. That would be how the election becomes a real problem, and not just a worry.