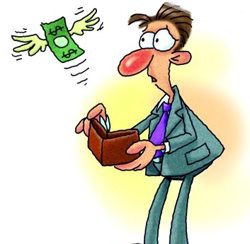 Making ends meet seems to be a struggle for most people these days, no matter how much they seem to be earning.

According to a recent report from CareerBuilder, seventy-eight percent of full-time workers said they live paycheck to paycheck, which is up from seventy-five percent just last year. From a debt perspective, last year sixty-eight percent of U.S. workers overall said they were in debt, which has risen to seventy-one percent for this year’s research.  Only forty-six percent say that their debt is manageable, while fifty-six percent say they are in over their heads.

These issues are no stranger to those making over six figures either. About 1 in 10 of those making at least $100,000 said that they live paycheck to paycheck, with fifty-nine percent of them claiming to be in the red.

Most financial professionals would advise saving at least a six-month cushion for emergency purposes to take care of any unexpected expenses- such as car repairs or medical expenses. However, if you are a business owner or head of the household, six months may not be enough.  Household incomes have been growing over the past decade, however they have not been able to keep pace with the rise in cost-of-living expenses over that same time period.

Surprisingly, about fifty-six percent of people save $100 or less per month. Many claimed they have cut back on their 401k contributions and personal savings in the past year, with about one-third of workers who have not been putting money away for retirement at all.  Although not entirely to be blamed, personal responsibility has played a huge role in Americans’ financial problems.  The surveys have found that only one-third of workers actually stick to a budget.

With the statistics rising over time, it can be hard not to fear that these circumstances may affect your financial future. With a sound financial plan and a strategy to reach your goals, both present and future, you can feel confident that you are prepared for what lies ahead.