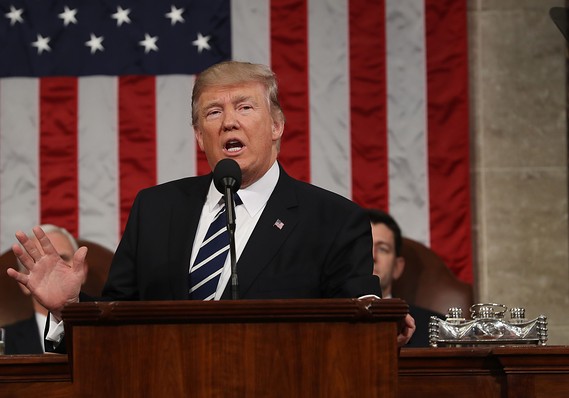 It was a grand slam.

It’s hard to pinpoint exactly why stocks have moved so far, so quickly. However, it appears that mom-and-pop investors have become quite enthusiastic about the asset class according to data from JPMorgan Chase cited by Bloomberg. While institutional investors (pensions, insurance companies, etc.) have been reducing exposure to stocks, smaller investors have been loading up on shares.

“Cognitive dissonance exists in the U.S. stock market. S&P 500 is up 10 percent since the election despite negative EPS [earnings per share] revisions from sell-side analysts…Investors, S&P 500 management teams, and sell-side analysts do not agree on the most likely path forward. On the one hand, investors, corporate managers, and macroeconomic survey data suggest an increase in optimism about future economic growth. In contrast, sell-side analysts have cut consensus 2017E [estimated] adjusted EPS forecasts by 1 percent since the election and ‘hard’ macroeconomic data show only modest improvement.”

Financial Times reported pessimism prevails in the bond market. One bond market professional said, “The bond market is taking a totally different view from the equity market. Blowing raspberries is a good way to put it…There’s no belief that the growth agenda will be dramatic.”

So, is strong economic growth ahead? Do bond investors or stocks investors have it right? Are institutional investors or mom-and-pop investors positioning themselves correctly? Only time will tell.

Tax season is upon us. That means we can all use some entertainment. While many folks dread the process of completing and filing taxes, some see it as an opportunity to test the boundaries of the system. Here are a few deductions Americans have taken that have failed to pass muster in tax court, courtesy of Kiplinger.com:

You cannot deduct the cost of a good night’s sleep.

A tax preparer who worked from home escaped to a hotel because her clients were calling in the wee hours of the night and causing her to lose sleep. When she attempted to take a business deduction for the hotel expense, the tax court ruled a good night’s sleep is a non-deductible personal expense.

You cannot take a theft loss deduction for poor construction

A couple moved into their newly built dream home only to realize the builder had cut some corners. The house had some serious issues, including its foundation. The couple claimed the builder had defrauded them and took a large theft loss deduction. While taxpayers can deduct losses from a home-related theft, shoddy construction doesn’t qualify.

You cannot take a depletion deduction for bodily fluids

A repo firm sponsored a trip to Las Vegas for its bank customers. The firm’s employees chatted with clients about business on the way to Vegas, but no formal meetings were held. The tax court denied the deduction.

Before you get creative with your taxes, consult with a tax professional.

“Because of your smile, you make life more beautiful.”